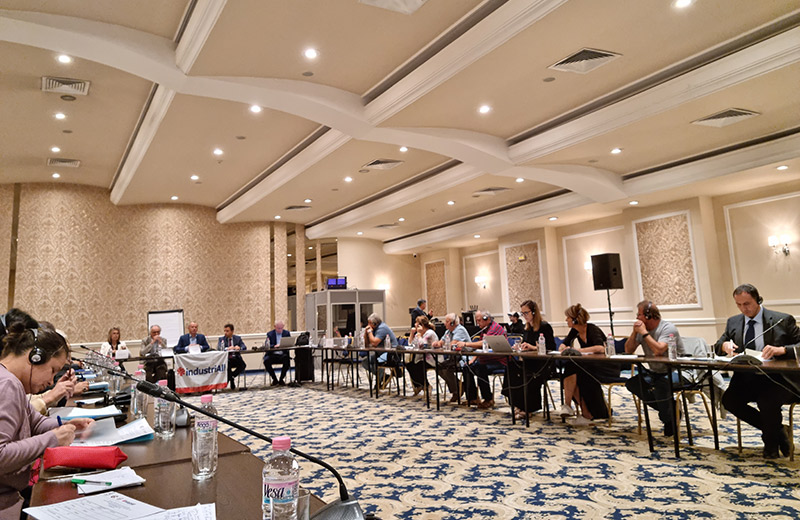 Bruxelles, 23 September 2022 – The textile, clothing, leather and footwear (TCLF) industries employ 80,000 workers in Bulgaria. However, employment has gone down by 20% in the past four years which is a concern. Social partners discussed the challenges and opportunities of the new EU Sustainable Textiles Strategy and focused on both environmental and social sustainability. They agreed that for the Strategy to be successful, all stakeholders must come together, and that a level playing field must be maintained between EU (Bulgarian) and non-European companies.

In the face of tough global competition, huge investment will be needed in both technology and people to ensure that the Bulgarian TCLF sectors can become greener and more digital. The modernisation of these sectors would also help the sector to become more attractive to Bulgarian workers, thus reducing the need to hire workers from abroad.

Employers and unions called on the Bulgarian government to come up with an industrial strategy to make use of the growth opportunities for a country close to major European markets. In the EU Strategy, TCLF industries are one of 14 industrial priority sectors.

Concerns were raised by national social partners, similar to other central and south European countries, that some young workers have opted to leave for Western Europe. Proposals to tackle this issue included ensuring better purchasing practices from major fashion brands whose suppliers account for over 90% of TCLF production. The social partners voiced their hope that with improvement in the purchasing practices of brands, changes in the behaviour of consumers and measures to ensure competitiveness that benefits could be felt by both industry and the workforce.

FOSIL-CITUB and FLI-PODREPA unions called for stronger social dialogue and sectoral collective bargaining. There has been no branch agreement since 2008, and existing company accords only cover 3-4% of the sector. This is far from the 80% coverage mentioned as reference in the upcoming European Minimum Wage Directive. As such, the unions have agreed to start developing a work plan to increase their leverage.

Employers wanted to have regulations to combat the grey economy and unfair competition. BAATPE and BATOK associations acknowledged that social partners must increase their representativeness to have a louder voice.

“The message from trade unions in Sofia is clear: we need quality social dialogue and strong collective agreements to ensure a positive future for the TCLF industries in Bulgaria. The EU’s Sustainable Textiles Strategy offers a real opportunity if managed correctly, but investments – both in technology and the workforce – will be essential. This includes ensuring fair wages and good conditions to retain current workers and attract new ones.’’

“In a context where Europe puts more focus on quality, transparency and sustainability, Bulgarian textile companies have a future. But they need support from the authorities to make that green and digital transition, and a constructive social dialogue, which ensures long term competitiveness of the industry.”

“Moreover, a particular focus and attention should be given to investments on skills and lifelong learning of workers. People are the main asset for the growth and competitiveness of the footwear and leather goods industries, and the education system in Bulgaria should be able to respond to companies’ skills needs. For that purpose, adequate curricula and related training programmes should be developed and education infrastructures made available by public authorities, in particular when it comes to vocational education and training (VET).’’

“Leather producers in Bulgaria and all over Europe constitute a fundamental link in the world’s most demanding fashion value chains. They also play an important societal role, as they collect and transform a residue of the food & feed ecosystem into one of the most appealing textile ecosystem materials there is. For keeping generating wealth and jobs they need support from their public authorities for solving the problems of rocketing energy costs, unfair extra-EU competition, and a difficult labour market.”